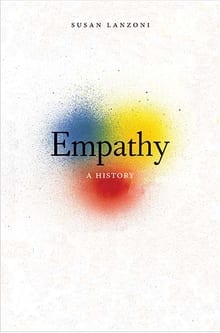 Empathy: A History tells the fascinating and largely unknown story of the first appearance of empathy in 1908 and tracks its shifting meanings over the following century. Despite the word’s ubiquity today, few realize that it began as a translation of Einfühlung (“in-feeling”), a term in German psychological aesthetics that described how spectators projected their own feelings and movements into objects of art and nature.